The reserve price for the potential en bloc sale of the Simsville condominium has been raised to S$1.05 billion, up from as much as S$901.5 million previously, according to a notice sent to unitholders and seen by Shenton Wire.

The decision was made “in view of recent developments in the property market generally and taking into account feedback from the subsidiary proprietors,” the statement said. 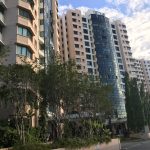 An en bloc sale is a collective sale of multiple units of property; in Singapore, when a development is sold en bloc, the buyer usually plans to demolish the existing property and re-develop. The owners are typically paid a sizeable premium in an en bloc sale, but a super majority of at least 80 percent must agree to the sale and later to the purchase price.

The increased reserve price would boost the estimated gross sale proceeds for each Simsville unit to more than S$1,600 a square foot from around S$1,500 a square foot previously, the notice said.

Data from Square Food Research showed the average price range for units at the development was S$1,185 a square foot over the past six months, while the historical high was S$1,235 a square foot, set in October 2019.

SimsVille has 522 units across four towers as well as facilities including pools, tennis courts and other amenities.

As of 25 June, 116 out of the 522 units — or 22.05 percent of the condo development’s total share value — has signed on to the collective sale agreement, the notice to unitholders said. If the acceptance reaches 80 percent, then the development will begin to consider any bids.

“We hope that more subsidiary proprietors come forward to support the collective sale of Simsville and avail themselves of this golden opportunity to unlock their asset values,” the notice, which was signed by the chairperson of the collective sale committee, said.

The residential property, located in Singapore’s Geylang neighborhood, was completed in 1998. It’s uncommon for properties less than 30 years old to successfully complete an en bloc deal in Singapore. SimsVille is a 99-year leasehold property; its countdown started in 1994.

The preceding article is from one of our external contributors.
It does not represent the opinion of Benzinga and has not been edited.