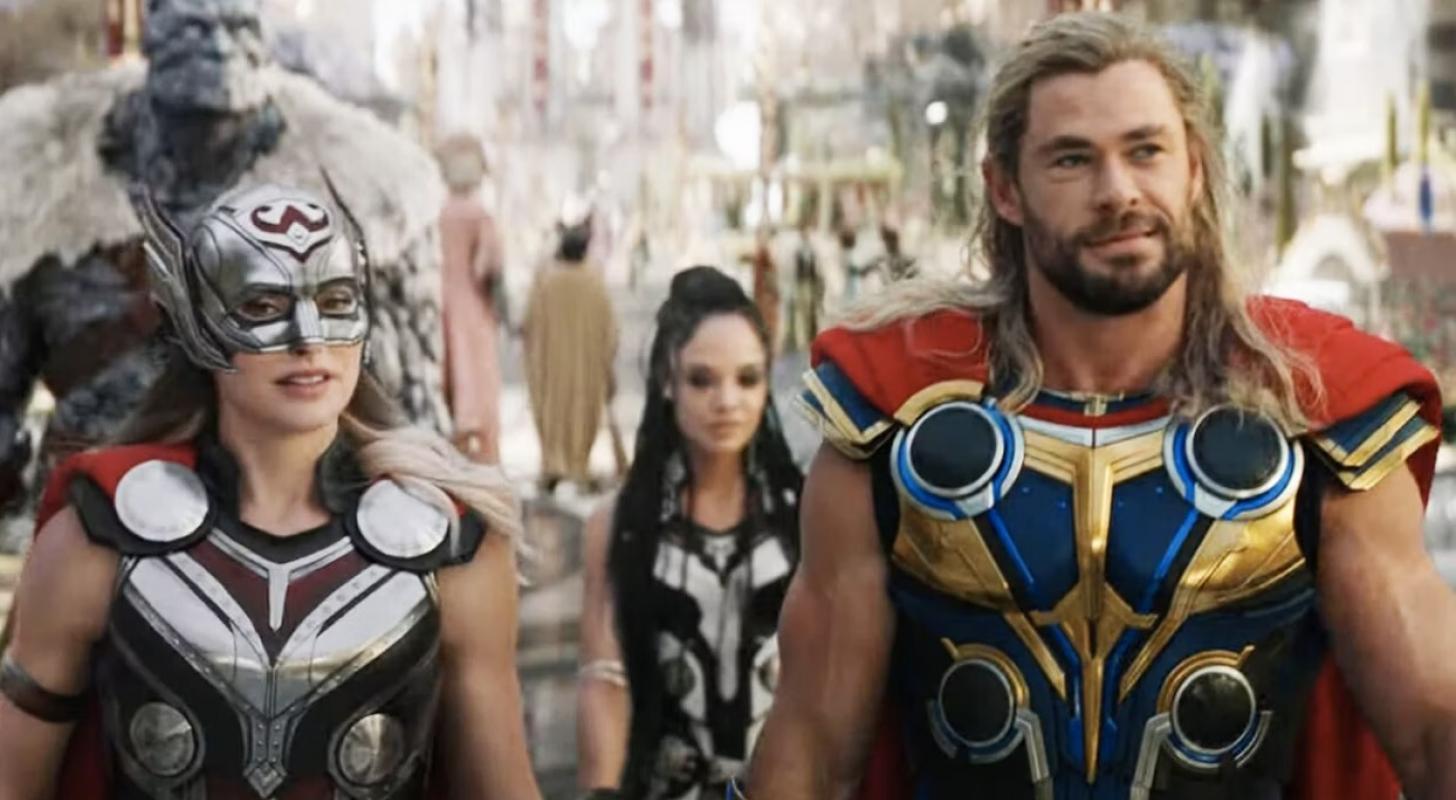 “Thor: Love and Thunder” lost audience love and box office thunder during its second week in U.S. theatrical release, but it nonetheless held its position as the top attraction with moviegoers over the weekend.

What Happened: According to Deadline, the latest installment in the Walt Disney Co.’s DIS Marvel Cinematic Universe recorded a 68% decline in ticket sales during its second weekend in theaters, closing the three-day span with $46 million from 4,375 theaters.

To its good luck, the two new major films opening this weekend underperformed with audiences: Sony Pictures’ SONY “Where the Crawdads Sing,” an adaptation of Delia Owens’ best-selling novel, grossed $17 million from 3,650 theaters for a third place ranking at the box office and Paramount’s PARA animated feature “Paws of Fury: The Legend of Hank,” brought in a weak $6.25 million from 3,475 screens for a sixth place finish.

Meanwhile, three holdovers continued to hold their own against the newer competition: “Minions: The Rise of Gru” from Comcast Corp.’s CMCSA Universal Pictures ranked second with $26 million from 4,111 screens while Paramount’s “Top Gun: Maverick” ranked fourth with $12 million from 3,292 venues and Warner Bros.’ WBD “Elvis” placed fifth with $7.6 million from 3,305 theaters.

For those seeking out smaller and quirkier films, the coming weekend also includes the limited theatrical releases of Magnolia Pictures’ documentary “My Old School” about how 30-year-old Brian MacKinnon successfully posed as a 17-year-old in a Scottish school; Gen1 Entertainment’s school revenge drama “Bundles”; and Quiver Distribution’s melodrama “The Wheel” about a young couple working to save their fraying marriage.

Also Worth Noting: King Vidor was one of the most versatile filmmakers of the Hollywood Golden Era, with a career that spanned the 1920s’ silent classics including “The Big Parade” (1925) starring John Gilbert and “Show People” starring Marion Davies films through the 1950s’ widescreen epics including “War and Peace” (1956) starring Audrey Hepburn.

Vidor took chances on bringing the gritty vitality of American society to the screen, including his masterwork of urban emotional oppression (“The Crowd,” 1928), the groundbreaking focus on a disenfranchised Black community in the Jim Crow South (“Hallelujah,” 1929) and two jolting portraits of Depression-era America (“Street Scene” in 1931 and “Our Daily Bread” in 1934).

But Vidor also knew what audiences wanted, which he delivered in tropical romantic fantasy (“Bird of Paradise,” 1932), four-tissue melodrama (“Stella Dallas” in 1937) and the most delirious over-the-top Western ever conceived (“Duel in the Sun” in 1946). He even had the temerity to bring Ayn Rand’s seemingly unfilmable novel “The Fountainhead” to the screen in 1949 starring Gary Cooper and Patricia Neal.

New York City’s Film at Lincoln Center will be offering a career retrospective of Vidor’s canon from Aug. 5-14. Cinephiles will be delighted to know that most of the titles being presented will be screened in 35mm prints – “Ruby Gentry” (1952) will be seen in a 16mm version and “War and Peace” will receive a digital presentation. A few Vidor milestones are not part of this retrospective, most notably the 1952 “Japanese War Bride” that broached the once-taboo subject of interracial marriage and the 1949 “Beyond the Forest” with Bette Davis spitting out her camp classic declaration “What a dump!”

Two rarely seen documentary shorts that Vidor made at the end of his career, “Truth and Illusion” (1964) and “Metaphor” (1980), will be shown. But Vidor’s most notable contribution to film history will be absent – when Metro-Goldwyn-Mayer pulled Victor Fleming from the production of “The Wizard of Oz” to direct “Gone with the Wind,” Vidor was recruited to create the musical’s sepia-toned Kansas sequences. Sadly, Vidor received no credit on “The Wizard of Oz,” although later generations of film scholars identified him as being responsible for directing the segment with the most famous song in movie history.

Photo from “Thor: Love and Thunder” courtesy of Disney